Based On Worldwide Support For His Recently Released New Album VIBRAS, And His Status As A Highly In-Demand Collaborator, J Balvin Reached The #1 Global Position On Spotify Today. His Total of 48.158,683 Million Monthly Listeners Is The Highest–Ever Total For a Latin Music Artist.

“All I can say is thank you, thank you; I’m so grateful and proud to be the most heard artist in the world on Spotify. It’s bigger than J Balvin, it’s the movement and it’s in Spanish. We are proving that Latinos have the power to connect with an audience on a global level without having to leave our identity behind. This is an achievement for the entire Latino community. I’m so grateful to Spotify for the enormous support to the reggaeton movement.”  – J BALVIN

“J Balvin is demonstrating, in record time, that music in Spanish has no borders. The trend of consumption of his music, not only in streaming platforms, but also nightclubs, radio, etc. continues to grow exponentially- penetrating all social backgrounds worldwide. At his young age, this Universal Colombian artist is becoming a living legend of our music” – Jesus Lopez, Chairman & CEO, Universal Music Latin America and Iberian Peninsula.

Arriving With Latin Music’s Biggest Debut Of The Year, J Balvin’s “Vibras” Has Been Selected As ‘One of the Best Albums of The Year So Far’ By TIME, ROLLING STONE & BILLBOARD 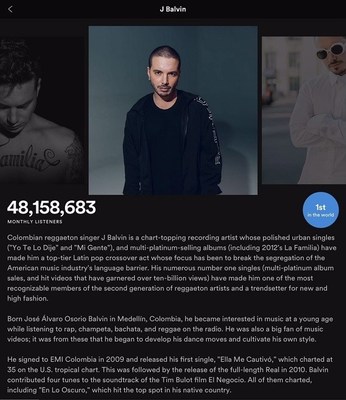 Hailing from Medellín, Colombia, José Álvaro Osorio Balvin – better known to a legion of global fans as multiple Latin Grammy winner J BALVIN – has been praised by Billboard as “the biggest breakout act Latin music has seen in many years” and is the only Latin artist included in Rolling Stone’s recent spotlight of the “New Classics” – “creative visionaries… who refuse to be contained by the rules of the past as they define the territory of the future.”  With a distinctive style all his own, that pays reverence to the first-wave of Reggaeton stars from Puerto Rico, but fused with additional Colombian and mainstream hip-hop rhythms, more seductive than boastful lyrics, and a strong passion for fashion, J Balvin has become the undeniable leader of a second-generation Reggaeton revolution propelling an Urban sound back to the forefront of Latin music worldwide.

With the recent chart-topping release of VIBRAS, J Balvin adds to his already celebrated catalogue with a new collection that combines throwback tracks paying tribute to old school reggaeton, balanced with adventurous new fusions that moves the genre far forward in style, tolerance and rhythms that will continue to expand the global embrace of Latin Urban music. With the previously mentioned impressive list of superstar collaborations already to his credit, Balvin chose to demonstrate the strength of this musical chapter with focused pairings shining a spotlight on respected reggaeton contemporaries (Wisin y Yandel, Zion & Lennox), critically praised cross genre Latin artists (Carla Morrison, Rosalio) and innovative/rising international artists such as Willy William, Anitta, and Jeon.  The majority of the album sees the producer chairs held down by Balvin’s longtime Colombian artistic partner/producer Sky, as well as Puerto Rico’s reggaeton pioneer Tainy – while Willy William, and Chuckie & Childsplay helmed the #1 advance singles “Mi Gente” and “Machika” respectively. But whether it is the propulsive rhythm of those already established hits, or the laid-back summer groove of the title track and current single “Ambiente,” the one universal thread Balvin made sure to instill throughout the album is music that all audiences can quickly ‘vibe’/connect with – extending the understanding of Latin culture and moving Spanish forward to an equal footing in the global pop landscape.

Universal Music Group (UMG) is the world leader in music-based entertainment, with a broad array of businesses engaged in recorded music, music publishing, merchandising and audiovisual content in more than 60 countries.  Featuring the most comprehensive catalog of recordings and songs across every musical genre, UMG identifies and develops artists and produces and distributes the most critically acclaimed and commercially successful music in the world.  Committed to artistry, innovation and entrepreneurship, UMG fosters the development of services, platforms and business models in order to broaden artistic and commercial opportunities for our artists and create new experiences for fans.

Universal Music Group is a Vivendi company.  Find out more at: http://www.universalmusic.com