– GAC Motor, together with Three-river-source National Park Administration and World Wildlife Fund (WWF), continue to protect one of Asia’s most important freshwater sources before the park’s opening to the public in 2020.

GUANGZHOU, China, July 26, 2019 /PRNewswire/ — GAC Motor, Three-river-source (Sanjiangyuan) National Park Administration (“the Park Administration”) and World Wildlife Fund (“WWF”) launched China’s first national park conservation plan in 2016. A deliverables report recently released by the three parties has demonstrated the achievements they completed in the past three years, including the record of a rare black wolf’s first appearance in China. The report revealed that GAC Motor’s participation in the construction of China’s first national park had set a template for enterprises joining the development of national parks as a social force. 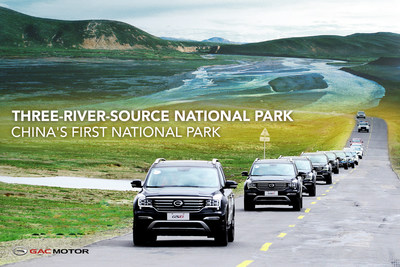 In the past three years, GAC Motor has been working with the Park Administration and WWF to establish and improve the mechanisms for public participation in the construction and management of national parks.

About 15,000 wetland birds of 26 species, including several vulnerable species, have been recorded at the Yellow River source area, where an infrared camera captured rare images of snow leopards and black wolves, proving that the natural resources and ecosystem have been restored effectively since the construction of the national park.

To improve the life of local herdsmen, the three parties introduced “alternative livelihood” projects to support herdsmen in becoming ecological conservators in the national park, which ensures the sustainable development of local communities, while achieving the goal of protecting the environment. They have not only explored a way out of setting up a national park management system, but also made breakthroughs in terms of monitoring the biodiversity and overall park environment.

“With the opening of Three-river-source National Park in 2020, the public will pay greater attention to the importance of ecological protection. We hope that more enterprises and social forces will join us to support and participate in the protection of the the national park,” said Yu Jun, president of GAC Motor.

As the first enterprise to participate in the construction of the national park, GAC Motor has delivered 25 SUVs and several batches of patrol supplies for the park’s daily operations and routine patrols. For consecutive years, the company has also organized volunteers from its Wetland Ambassadors Program to conduct biodiversity surveys with ecologists to protect one of Asia’s most important freshwater sources.

GAC Motor has helped the national park on the overall protection of the natural ecosystem and will support the park in preparation for its opening to the public. It will also continue to work with The Park Administration and WWF to build up a national park that represents China’s environmental protection and ecological restoration.